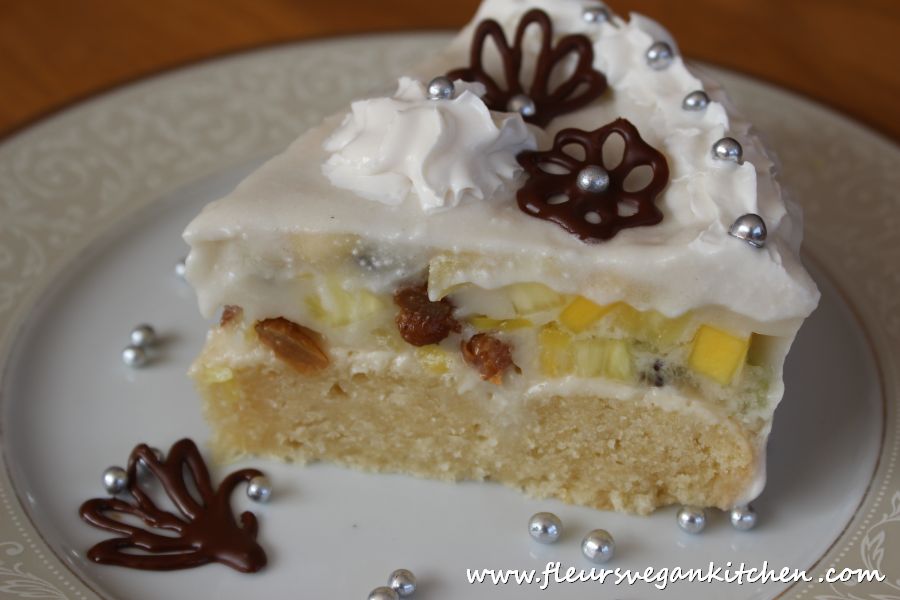 Mix the oil, water and sugar and whisk until the sugar dissolves. Add the rest of the ingredients and mix everything thoroughly . The composition should have the consistency of cream otherwise add a little bit more water / flour as necessary.

Pour it into the baking springform and bake it, in the preheated oven, for approx . 30-40 minutes. Check with a straw if it’s baked inside.

Remove the base from the springform and wash the form (to prevent sticking later).

For the cream and whipped cream:

Put 3 of the coconut milk cans  in the refrigerator for several hours (or overnight). Separate the solid part  from the liquid. Put the liquid in a saucepan along with the other canned coconut milk (which was not  refrigerated),  ½ cup sugar and 2 teaspoons vanilla essence. When it starts to cook add the agar-agar (dissolved in a little bit coconut milk, otherwise it will form lumps) and continue cooking for 2 minutes. Allow to cool stirring occasionally. When it has slightly cooled add the fruit and mix. Pour the mix on top of the base in the springform.

Allow to cool in the refrigerator.

For the whipped cream mix the solid part of the coconut milk with the remaining sugar and vanilla essence (see the recipe here). 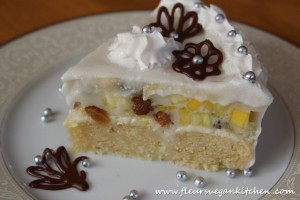